A calendar so beautiful, you won't want to turn the page
A daily calendar starring local communities: a new day, a new page, a new topic, each telling the story of Yilan.
The idea for a community calendar came from Mr. Li Jinqiang in Yuanshan Township's Alancheng, who wanted to see his own hometown featured in its pages. This led to the Alancheng image journal, which in turn gave birth to the Yilan County Community Calendar that features 12 different communities each year. Over the past 18 years, the calendar has spotlighted the stories of 216 communities.
To produce the calendar, communities must be highly mobilized and discuss how to best show off their hometowns. This in itself requires residents to build a basic community resource inventory, while working together to create a sense of pride in their community. The process creates a flurry of activity, fertile soil that can nurture the sprouts of community development, which is a first step in empowering residents.
The community calendar was the first of its kind in Taiwan and has been a companion to communities as they start down the path of development. Everyone gathers together with the same purpose, listening to the elderly remember their childhoods and discuss their daily lives. While talking and laughing together, residents can learn about the past and experience the history of their communities. These memories are turned into words that jump off the page to create a calendar that you will want to keep long after those days have passed.

Jixin Community was created by combining Jishui and Xindian Villages. Surrounded by water with the Pacific Ocean to the east and Dongshan River to the west, community residents lead the classic fishing village lifestyle. The community was originally home to three Kavalan pingpu groups (Liuliu [流流社], Polo Sinnawan, and Jialiwan [加禮宛社]), whose members primarily married Han people and were sinicized. In the past, residents relied on fishing for their livelihoods, while today many farm sweetfish, giant grouper, and shrimp.

Farming and Fishing in Cunren

Cunren Community was formerly named Gonglaopu, where it is said residents assisted the imperial court to repel marauding pirates and were rewarded with land for their trouble. A different origin story says that the village actually got its name from the surrounding reed forest.
In the area’s early days, residents took advantage of its fertile land and fish-filled waters by making a living through agriculture and beach siene fishing. Natural springs, wetlands, and ponds add to Cunren’s ecological richness. Religious life centers around the Ding’an Temple dedicated to worshipping Wuxian Dadi.

The mountainous terrain of Paolun was said to look like a gourd ladle, called a paoshao, which gave the community its original name, Paoshaolun. This was later shortened to Paolun. The quaint settlement features winding paths that give it the appearance of a small town.
Early in its history, most residents’ lives revolved around temples and religious festivals. The community set up a patrol and guard towers to defend against attack by the Atayal indigenous people. Life also included burning wood to extract camphor oil, growing tea, and collecting firewood. In order to share the mountain spring, residents developed a unique method to parcel out this precious limited resource. 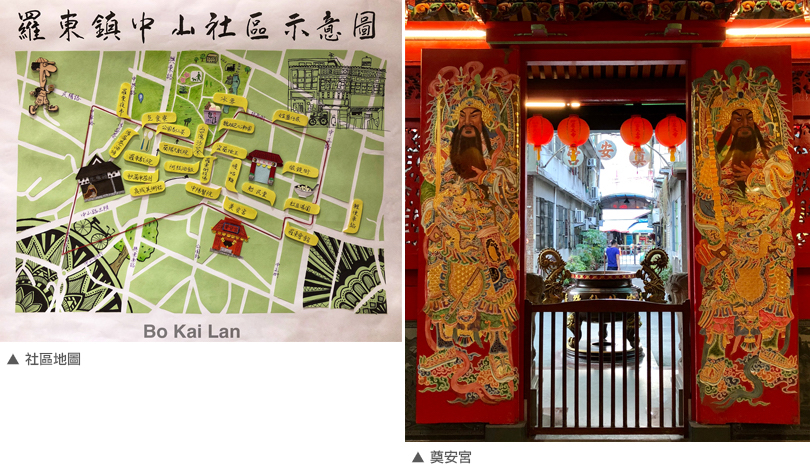 Zhongshan Community was named after neighboring Zhongshan Park. While small in area, it is centrally-located in the most prosperous area of Luodong. Both the Luodong Night Market and Yilan County’s most expensive real estate are located in Zhongshan. The religious center of the community is Dianan Temple, primarily dedicated to worship of Xuandi, which features intricate carvings and rich decorations of exceptional quality. People travel from far and wide to enjoy foods from famous long-standing establishments like Gongyuan Almond Tea that has been operating for 70 years and a red bean soup with rice dumplings stand with 50 years of history. Other famous eats include a five-decade-old purveyor of traditional thick rice noodles, Duku Noodles, A-Chi Taiwanese Sticky Rice, and Ice Snow, a favorite among the elementary school set. Local stuffed pearl tapioca has even made a name for itself abroad. These local snacks get a big thumbs up from all who try them. 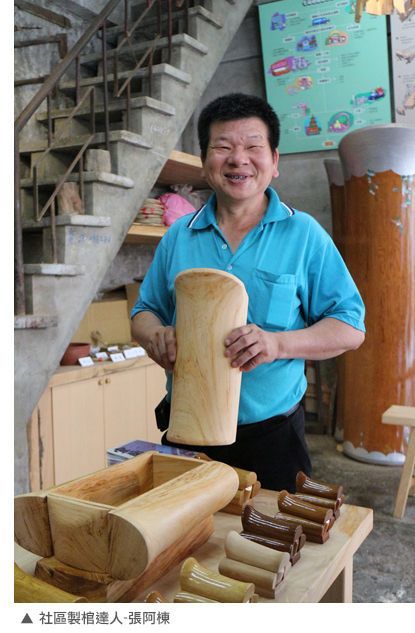 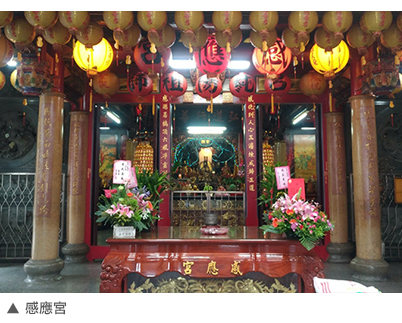 Zhongshan Community, formerly known as Shiliukan, is located in old town Yilan between Kanxing Gate and Duian Gate. Shaped like a fan, the streets stretch outward like the fan’s ribs. Cars and motorbikes stream through the streets, which are lined with many temples. Itinerant artists hide out here and rows of Japanese-style buildings suffuse the area with an old time feel. Traditional workshops and food stands bring smiles to the faces of visitors. The area, steeped in history and traditional culture, is a quaint corner of a prosperous modern city.

Chengxing is located in southeastern Wujie Township. Originally split into two separate areas, Chengxing Zhuang and Xiaqingshui Zhuang, these were combined to create Chengxing Village, which is today’s Chengxing Community. The sandy soil of this coastal community is perfect for growing beans in the spring and radish in the fall. Thriving in the local soil and climate, the community produces outstanding quality produce.
The famous Wushierjia Wetlands are located here as is Yamuliao, a place of deep historical significance. The community is home to Lize Industrial Park that helps promote a prosperous local economy.

Longing to Return to Guishan Island and Life on the Ocean

Guishan Island was once home to a thriving fishing village. In 1975, residents were forced to move when the military took control of the island. Then in 1977, residents moved into the 106 public housing apartments in a complex named Renze Community. As part of the 1994 National Festival of Culture and Arts, Yilan held Longing to Return to Guishan Island! where former residents returned to the island for the first time in nearly 20 years. Later, a petition was circulated to rename their new area Guishan Urban Village and Guishan Island Community, which was achieved in 2001. Today, most residents still make their living from the sea. The center of religious life is Gonglan Temple. Residents maintain their traditions brought from the island of playing cunzi, a children’s game, and flying 72-cornered kites.

Su’nan Community is located south of Su’ao Street, with Su’ao River to the left and Cold Springs River to the right, and is one of the liveliest areas of the township. During the Japanese Occupation, the Su’ao District Administration Center was located in Su’nan. Following World War II, area train and bus stations brought travelers from around the country into Su’nan along with their business. However, when the new North-link Rail Line opened, Su’nan was bypassed and the economy slowed. Today, Su’nan still houses many businesses, hostels, supermarkets, and financial institutions, making it a very convenient place to live.

Rende Community is bordered by Luodong Street and was known as the red tile district, after the red tile houses first built here. The community was also a base of the Fulan Troupe, in the Beiguan musical tradition, which often had conflicts with the Xipi faction (Xipi Fulu Battles). In order to promote forgiveness and empathy between the groups, the area was named Rende, meaning compassionate integrity. Located on the bank of the Yuemei River, Rende is blessed with rich ecological resources and delights for all the senses including Beiguan opera, sugar-marinated duck, soy milk cooked over a wood fire, and Taiwanese doughnuts.

The old city of Yilan was once protected behind city walls, with four gates allowing access. Located where the North Gate once stood, Qinghe Community is named after Qinghe Temple, which has over two centuries of history and is dedicated to worship of General Fushun. The local abattoir was once located here, but the building was torn down and the Yilan County Social Welfare Center built in its place. Stores established over a century ago, such as Laoyuanxiang Ox-tongue Shaped Biscuits, are known far and wide.

Nanjin Community is located on the northern bank of the Lanyang River and lies at the entrance to Yilan city from the south. Formerly named Zhuanger Linbiao Cheng, the community can thank the Lanyang River basin for fertile soil that yields abundant, high-quality green onion, garlic, watermelon, and rice. Both the County Government Administration and Yilan County Council are located here, along with the Lee Clan Shrine. The area is rich in both cultural and ecological resources. Famous local delicacies include Lilong Turtle Buns, garlic, and pumpkin.

Kezhuang and the Aroma of Tea

According to legend, Yulan was originally named Helan, meaning sawmill in the Atayal language. Taiwanese speakers changed this to Yulan, while in Japanese the area was known as Gyokuran, and was also called Yougulang. Yulan Community is a quiet mountain village that primarily relies on tea cultivation. While it is only home to around 40 households, the population is surprisingly diverse. Residents come from a variety of backgrounds including Atayal indigenous people, Hakka, mainland Chinese, and Minnan people from earlier Chinese migration to the island. In recent years, bed and breakfasts, restaurants, and tea-flavored snack stands have popped up in the community, making it a great place for visitors to relax and experience local agriculture.